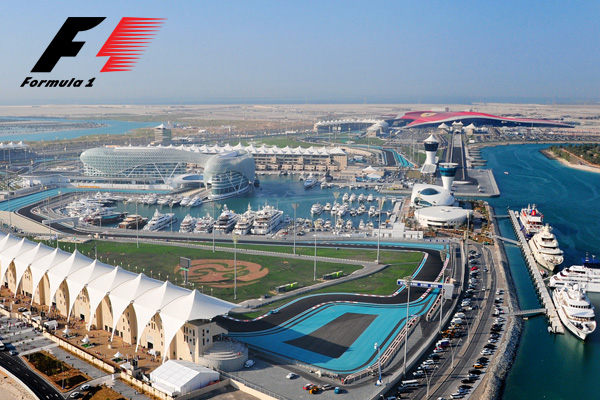 The Abu Dhabi Grand Prix was 1st hosted on November 1st 2009. This unique Yas Marina Circuit was designed with the race goer in mind, boasting top speeds of 320 km/h and average speeds of 195 km/h, it features 9 right turns and 12 left turns and is one of the few venues on the calendar to run in an anti-clockwise direction.

Another world first is that all of the grandstands, including the massive hairpin seating area, are covered to protect spectators from the desert sun, whilst the state-of-the-art pit building boasts 40 air-conditioned garages. Yas Marina has a waterfront setting scenic enough to rival the likes of Monaco and Valencia. And with the track wrapping itself around the island's glamorous newly-built marina, there's plenty of mooring space for the paddock's plethora of yachts.

The track itself was designed with racing in mind. As well as the waterside marina area, there are high-speed sections (including the longest straight on the F1 calendar), tight corners for overtaking, and even a twisty street circuit-style sector. Overall, its diverse elements come together to create one of the longest and most demanding tracks in the world, where close and competitive racing is guaranteed.

The event as you may have realised finishes on the same Sunday as the DP World Championships.

An all-round phenomenal experience. Everything from...

Please note: All Masters tickets are sold for more than face value. The use of any logos, words, trademarks, or photos have been used for descriptive purposes only and not to show endorsements or permission to use or promote the sale of any golf tickets. We are in no way affiliated with, nor do we have any licences to sell goods and/or services in conjunction with the US Masters.